Ayatollah Qassim Asks Everyone to Stand against Sham Elections 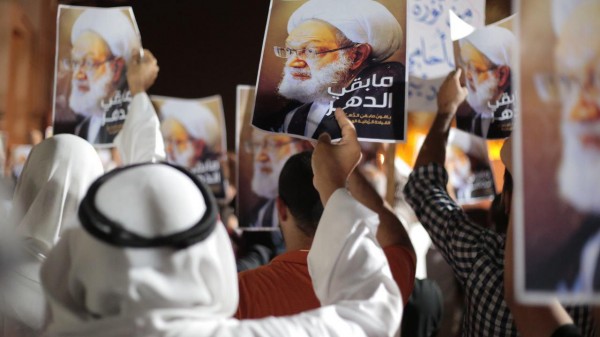 Bahrain Mirror: Ayatollah Sheikh Isa Qassim demanded that everyone should stand in the face of the upcoming elections which he dubbed a sham, describing them as false.

He stressed in a statement on July 13, 2022, that if the elections were conducted against the will of the people, the people "must disown them so that their will is not eliminated on the grounds of their consent, public consent or silence by their exclusion."

Below is the full statement:

In the name of Allah the Most Gracious, the Most Merciful

Proceeding with the election process in accordance with its unjust reactionary plan to achieve the concentrated authoritarian objectives of unilateral policy-making, which goes against the interest of the people, means only a new setback for the nation, further deepening of the tragedy of the people, a stabilization of the government's dictatorship, and a prolongation of the general ordeal which the people of this beloved country are suffering from.

Those who believe in the Sharia of Islam should not remain silent in the face of the unjust electoral scheme aimed at drawing the fate of the people against their will, and to further marginalize them and abolish their interests.

Everyone, who believes in the fairness of religion, and who loves his homeland, is required to stand up against these false elections that are a mere lie to the people. If the elections were conducted despite the people's will, they must disown them so that their will is not eliminated on the grounds of their consent, public consent or silence by their exclusion.

The serious pursuit of valid, unforged elections is wanted and with the failure of the attempt comes the role of outright rejection of any false and deceptive election. It is a crime that the people remain silent about the election of an oppressor, and appear satisfied with it.

It is not right to have the people give anyone a chance to file a false claim against them because they participated in the unjust elections, or to remain silent. If the people did so, this means that they are withdrawing one of their rights and accepting the humiliation of subservience.

If the government wanted good for this country with all its people, it would not have steered from fair elections with all that guarantees it; justice, fairness and honesty, to false fraudulent elections that have nothing but false media and misleading propaganda and exploitation of the people's money.