"I Proceed with the Prophet's Religion": Ashura Slogan for this Year 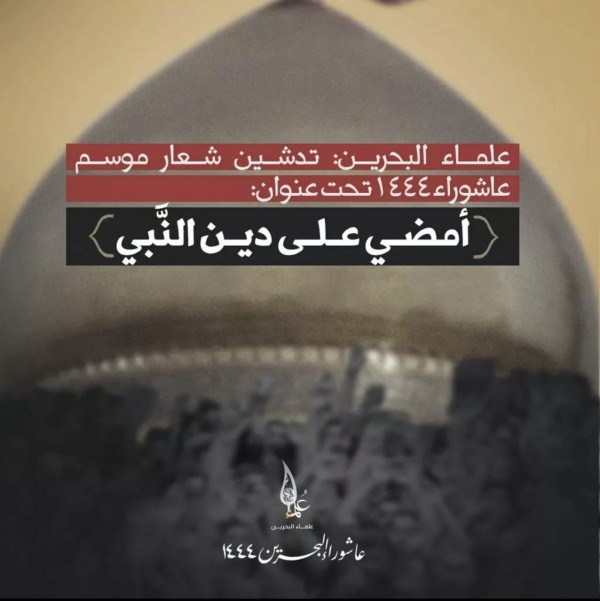 An official statement said that the slogan was inspired by the fact that "Karbala proceeded with the religion of the Prophet (PBUH), and Ashura was the redemption of religion and man, and from here Hussein (peace be upon him) was a starting point, an approach and a goal inseparable from religion, as the great martyr of Karbala sacrificed himself for the sake of religion."

"Today in Bahrain, we raise this slogan: the slogan of Hussein (pbuh) in his final campaign, to affirm the same principle, purpose and eternal approach to all matters, to stand in a position where one could renew allegiance, and focus on the steadfastness and eternal Husseini stability. Hence, the Ashura slogan for this year is: I Proceed with the Prophet's Religion".

One of the objectives of this year's slogan is to "consolidate the centrality of religion, affirm pride in religious belonging and promote it in thought, feeling, action and practice, and focus on embracing Islam as the basis for unity, jihad and resistance against the enemies of religion and humanity."

Every year, a slogan for the Ashura season, which is commemorated by the majority of the people of Bahrain despite the harassment of the authorities, is launched. Among the most prominent slogans launched in recent years were: "I will forever defend my religion", "With a victorious Imam" and "Glory of Faith and Imam".

Preachers lectures, eulogy reciters, social media users focus on the chosen slogan in their posts and lectures. The slogan is also used heavily on banners.