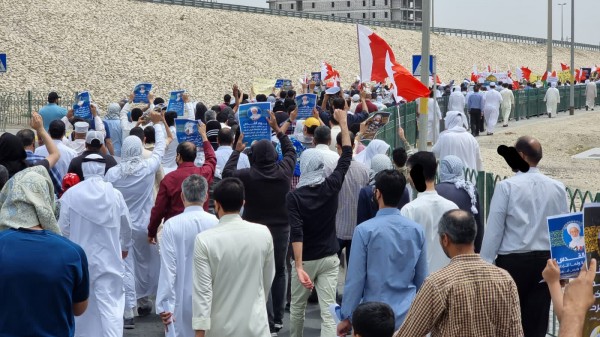 Bahrain Mirror (Exclusive): Hundreds of Bahrainis took to the streets in different villages across Bahrain on April 29, 2022, marking the Al-Quds International Day, which falls on the last Friday of the Month of Ramadan.

Protestors held posters that read phrases denouncing the normalization of relations between the Bahraini government and Israel and chanted anti-government slogans.

Protests were staged on Thursday night (April 28, 2022) and continued the next day. Demonstrators marched in the capital Manama, Samaheej and various other areas.

The most prominent demonstrations were held in Abu Saiba, Bilad Al-Qadeem and Karbabad, in which a large number of citizens took part. "Our Women and Men Resist Occupation", "No for Normalization" and "Your normalization is Treason" chanted protestors.

Residents of Bilad Al-Qadeem, Abu Saiba and Karbabad stated in the activities they held that they will not give up the option of resistance and their support for the Palestinian cause, stressing that the people of Bahrain and every grain of Bahrain's soil disown normalization and betrayal, and that they and Palestinians are one people who share hostility to (Israel).

Mass marches were also staged in areas such as Al-Musalla and Al-Qidam. Participants raised Palestinian flags and photos of opposition leaders.

Heavy security presence and security patrols were witnessed in areas that are considered strongholds of opposition.

The spiritual leader of Bahrain's Shiite majority, Ayatollah Sheikh Isa Qassim, addressed the Bahraini people last Tuesday in a speech on the occasion of the Al-Quds International Day as part of the United Platform event, saying: "You, supported by your pride, dignity and great sense of honor, see that you must wash away the shame of normalization, whose great crime has been committed by local politics, to inflict its shame on a people who disowns and denies it and sees that it is its duty to resist it."

"I do not see and you don't see a serious crime that is greater than the crime of normalization, which targets our religion, our peoples and our nation and aims to crush our dignity and pride," he said.

Following the people's response to Ayatollah Qassim's call and staging crowded protests, the Deputy Secretary General of Al-Wefaq National Islamic Society, Sheikh Hussein Al-Daihi, commented, saying: "You can rest at ease, Sheikh Abu Sami (Ayatollah Qassim), your sons from Bahrain are at your disposal to strongly express their commitment to Palestine and Al-Quds through the crowded protests that were staged."