Fatima Kassim: Why is Bahrain a Strategic Stage for Countering Iran? 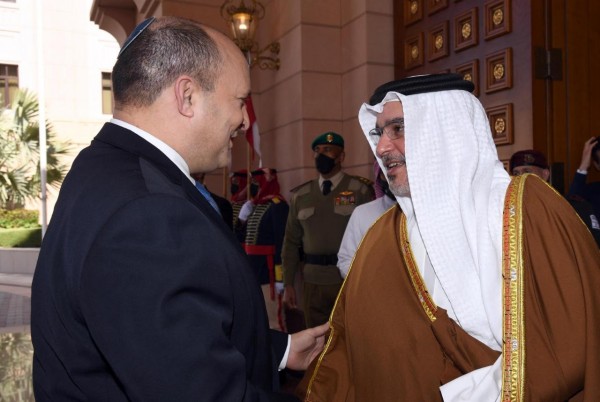 The Kippah is a religious and traditional Jewish skullcap that the most extreme, fanatical and hostile Zionists opt to wear. That's why the Israeli prime minister and the far-rightist (Naftali Bennett) straut around wearing it, as Bennett is known for his hardline Jewish views.

Naftali Bennett, a figure described as opportunistic and pragmatic, visited Bahrain for the first time in history as an Israeli prime minister wearing his Kippah.

Bennett wore the Kippah from the moment he arrived in Bahrain International Airport and during his meetings with King Hamad bin Isa Al Khalifa at his palace in Al-Sakhir and his counterpart, the crown prince, Salman bin Hamad Al Khalifa, who received him as the national anthem of Israel (Hatikvah) was played and a military parade was organized.

The extremist Naftali strode wearing his Kippah to the Crown Prince's palace as if his eyes were focused on Bahrain's neighboring countries, namely Iran; their enemy. Israel fears Iran, its regional influence and its military and nuclear capabilities.

Israel has resorted to the Gulf, which represents a strategic depth for achieving its long-term objectives against Iran, this time from Bahrain, which was intended to be a nearby stage and a station to target Iran and destabilize it and its security.

Naftali's visit lacks the feature of parallel bilateral relations. Even if the two sides try to showcase that they are promoting economic cooperation and joint action, Israel's prospects are strategic-security related, according to military analysis. This was revealed by Naftali during his interview with the Al-Ayyam newspaper as he said that Israel and Bahrain are dealing with major security challenges from the same source, namely the Islamic Republic of Iran.

Some may wonder why the Israeli entity chose Bahrain as a stage for targeting Iran, rather than the United Arab Emirates, which has normalized relations?

Despite all the facilitations provided by the UAE government to Israel, it has not succeeded in satisfying the wishes of the entity on the ground and the aspirations of its radical prime minister, who during his visit to Bahrain, worked on expanding the horizons of its military space and pushed Manama deep into this space.

Naftali views Bahrain after his visit from the perspective of a military and security dependent entity, especially after presenting maritime sovereignty as a token of love for the establishment of an Israeli military base.

The geographical map shows that the Israeli military base is 220 kilometers from Iran, where it will install a Patriot missile system, cruise boats, state-of-the-art security technology and remotely monitored spy devices, in order to attack Iran and threaten its security when the upcoming war occurs.

As Israel occupied the Bahraini waters, it also occupied its air. It is holding trade talks with Malca-Amit, an Israeli shipping and logistics company, specialized in transporting and storing precious goods.

These are the rules of the new Israeli hostile strategy against Iran from inside Bahrain, in the biggest breach of the region that suffered a heavy moral loss, as a result of the ruling family selling their country's sovereignty to Israel and the transformation of their land into an Israeli stage for targeting a regional and neighboring state called Iran, and here the story begins.