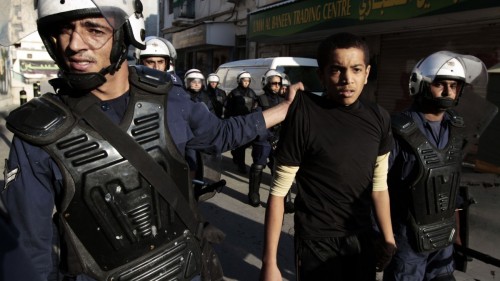 In the 1990s, during the Al-Karama (dignity) uprising, sentences against political prisoners were issued by the committee in Al-Qalaa or by the state security apparatus. They weren't sentences in a judicial or legal sense. The sentences or decisions, or call it what you will, were secretly written in the prisoners' files. They specified the period prisoners will spend in prison without allowing them to be aware of it. Only a few cases were referred to the state security crimes cour, whose verdicts vary between the death penalty, life imprisonment or temporary prison terms (5 years and above).

As for child political prisoners, the decision was in the hands of the head of the juvenile center (Awatef Hasan Al-Jishi). She used to determine the duration a child would spend in jail. There weren't any non-custodial measures (such as rehabilitation programs or training courses). However, jail terms didn't exceed one year and the child wasn't transferred to the adults' prison if his age became above 15.

Punishment in its primitive philosophy of law aimed to avenge the victim, but as time evolved the philosophy of punishment became different and turned into a philosophy of private deterrence and then turned into both public and private deterrence, until it became, in our days, a philosophy of reforming and rehabilitating the perpetrator until he is able to return to society and integrates into it. This historical, theoretical and even practical development in criminal jurisprudence and the criminal legal procedure which falls in the state's powers is part of the process of combating crime and trying to prevent it. It is to note that more forms of crime and criminal acts appear, as time passes and societies develops.

Non-custodial measures are modern methods adopted by the United Nations. The UN sets these measures as laws to guide member states, with the aim to expand the concept of punishment outside the framework of routine detention, especially for women and children.

If punishment was issued against an adult with the aim to deter him, it can affect his behavior. However, it is not the same case with a child. A child who commits a criminal act is not aware that he is committing a crime due to a lack of awareness. Besides, he is not aware of the consequences of the act he committed. Thus, issuing a penalty against a child will not achieve the purpose of punishment. Nonetheless, the effect of issuing a penalty against a child would have adverse effects and would intensify the child's criminality and underestimation of committing a crime. It would also break the psychological barriers and fears of punishments. That's why we find that many states have adopted non-custodial international rules, rehabilitation programs and special measures for children and steered clear of punishment. Law 4/2021 of Bahrain has followed this approach, however, it hasn't been put into effect yet.

In Bahrain, politicized and harsh sentences were issued against hundreds of children who were under 18. Some children were sentenced to life imprisonment. We shall not forget that a child, Martyr Ali Al-Singace, was executed, as he was under 18 years old at the time of the incident.

If Law 4/2021 (Children law) is correctly implemented and if a temporary judicial committee is formed to reconsider the previous verdicts issued against children, and if this committee abides by the provisions of the law and implements them while taking into account the retroactive effect and what's best for the defendant, we would realize a wrong practice has been adopted that has caused children to lose the most important stage of their lives, and that today they need to make up for their missed education. Here, I recall the letter of child Ibrahim Al-Moqdad addressing Ban Ki-moon in 2014, entitled: I miss the school seats!

The authorities should be responsible for helping this group overcome all obstacles that prevent them from returning to school. Society and parents must help this group return to their normal lives as well.