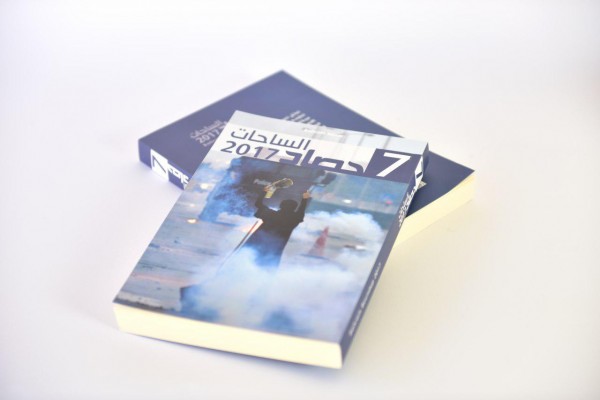 Bahrain Mirror- Exclusive: Bahrain Mirror published the seventh edition of its annual book "Bahrain Roundup 2017" that summarizes the most important political incidents that took place in the 7th year of February 14 uprising in Bahrain.

The book was gradually published on Bahrain Mirror website in the last 2 days of 2017 and was printed in February 2018.

It contains 4 chapters: Memoirs, In Depth, Portrait and Political Diary. It was issued in both Arabic and English languages.

The first chapter "Memoirs" includes the most important incidents that took place in the year, "execution sentences, execution of 3 activists, case of Rida Al-Ghasra and his companions in escaping Jaw Prison and their martyrdom in sea, outcomes of martyrs, outcomes of citizenship revocation, dispersing Diraz sit-in, the Constitutional amendment that allows military court to try civilians, first cases of military courts that ended up in sentencing 6 to death penalty over charge of planning to assassinate the marshal, Al-Basta group, targeting the press and media freedoms, Al-Wasat closure, torturing activists and blackmailing them in the NSA, issues about economic situation, Wa'ad dissolution, Bassiouni's death and dispute with Qatar.

The third chapter "Portrait" presented reports about five figures "Sheikh Hassan Sultan whose name was added to the Gulf terrorist list, Mohammad Sahwan who martyred in the prison, Khalil Al-Hayiki-one of the most prominent activists in Bilad Al-Qadeem, Sharif Bassiouni head of famous BICI report as well as the story of Mariam who waited her fiancé to end his prison term in order to marry him.

The last chapter "Political Diary" reviewed the incidents of the years, monthly. Each month reviews the most important incidents.

The book is available at