British Lawyer Abigail Bach: Bahrain violates international conventions and there is a mechanism in Britain that enables stateless people to obtain legal rights there 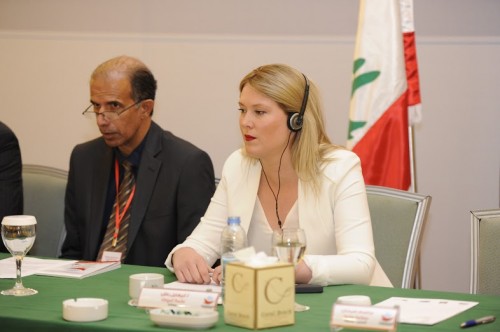 Bahrain Mirror (Exclusive): On the sidelines of the Fourth International Human Rights Conference, entitled: (Bahrain: Absence of Justice and Breach of International Commitments), which was held by Bahrain Forum for Human Rights and its main partners,  Bahrain Mirror interviewed the British human rights defender and lawyer Abigail Bach. Bach discussed the situation of "stateless Bahrainis", who have been stripped of their nationalities "because of their political views and critical statements of the human rights violations committed by the Bahraini authorities".

Bahrain Mirror: what do you have to say concerning the issue of "stateless" Bahrainis?

Bahrain Mirror: Can anything be done concerning these stateless individuals?

Bach: Yes, one of the helpful things is looking at the international law on statelessness particularly in Europe. This will help people if they are in a position when they are completely left without any rights to access the court, and it is no ideal but they will be able to get help in other countries that have signed this convention. So, for example, if they want to travel to Europe or to the UK, there is probably an application they could make and (they could be) allowed to stay in the UK and to be given legal rights there, because the UK has signed these various and different conventions.

Bahrain Mirror: Speaking of the UK, there is the case of Husain Jawad Perwiz. Husain, who is not yet stateless, hasn't being granted political asylum, considering its close relations with Bahrain, why is that is your opinion?

Bach: Well, that is an interesting point; it may be that the reason he hasn't been given asylum is because he is not yet stateless. It is quite strict in that way, but I don't know the case. So, I don't want to go in the details. But, I think you raised an interesting point about the relations between Britain and Bahrain, and it's a matter of opinion. Concerning this silence that Britain has at the moment about human rights, I think the UK has obligations to reinforce its own human rights standards everywhere, and I think the building of its naval base can be interpreted to be a way of buying Britain silence, and if that's the case, it's absolutely APALLING AND MUST be condemned. But at the moment the UK has obligations which they cannot avoid on the emigration laws; on what must not be allowed, and in fact it would very difficult to Britain to just ignore. So, even if they want to keep the relations with Bahrain good, and they may quietly give the Bahraini citizenship in the UK, they are obliged to do that, but they have to be stateless. So, if any Bahraini has the Bahraini citizenship removed, he would seek the nationality of another country which would be more difficult.

Bahrain Mirror: What about the Bahrainis who have been rendered stateless; they are deprived of all their rights, even travel?

Bach: In fact, this is the grief that I'm the most concerned about. There are specific international treaties, but I don't which one you're going through tomorrow. The international law says that the government, even in this situation, should never deny, should never stop some of the movements in the country, should never take the access to courts, but the reality is the individuals that have their citizenship removed can't even get help because they can't get out; they can't travel, they can't go to banks. I don't have the answers to those groups. It's absolutely the travesty of the human rights abuses. It's something that the international community should absolutely be doing something about, and they are trapping these people in the country without any assistance whatsoever. It's something that the international community needs to get involved in, but the legal chance is what can lawfully be done for them. They have been isolated.

Bahrain Mirror: Can they take legal action against their country?

Bach: They would have access to the courts, and the difficulty is that Bahrain, as far as I can see, is removing the citizenship quite wrongly, as the international law says when you remove the citizenship, you do not remove the access to the courts. But Bahrain has simply blocked any kind of way or any process they can use to challenge the decision, even if that is grossly unfair. These groups are of real concern, the reason is no direct roots that they have to try to challenge it through the international courts. The only potential root that I have found for individual petitions is possibly going for the UNESCO. Officially, UNESCO is usually considered more with things related to heritage sites; looks to education and social and culture effects, but it is mandate if one can hear the complaints include freedom of expression and education, and I think it's certainly arguable that anybody here has spoken against the regime, or tries to speak on human rights is having that freedom of expression oppressed by either removing their citizenship or removing their access to the courts or whatever other interference the government is running. They in fact would be able to relate the UNESCO with complaints. That brings international attention. In the case of the UNESCO, which is part of the UN, it can bring the spot light on this, and they have the ability to negotiate with the governments on the individuals' behalves to try to intervene and it may be that the Bahraini government doesn't want to cause any difficulty with the UN, therefore it would help the individual or at least give him access to the court. But the UNESCO doesn't have, unlike for example the International Criminal Court, the legal authority to force the Bahraini government to do anything. So, all the community can do is intervene, negotiate and try to help, but it is still quite powerful, because it is the international community and it would look very poor for Bahrain to ignore it. But again it is the least way for an individual to contact the UN to explain what happened with him, and the more complaints that one would get the more investigations they will do, but it is limited what they can do. As far as a legal solution for those individuals who have been denied any access to the court, it will be better to speak to a Bahraini attorney about what they can do. In the UK, for example, their equivalent would be a tuition review which is simply taking the decision for a public body to the court if this is fair. However, if they're denied even that access, it is very hard to know what could be done. Sometimes, NGOs can intervene on the individuals' behalf and it may be that the NGO would have the legal status to start the case.

Bahrain Mirror: Can they resort to the ICC?

Bach: No, The difficulty with the ICC that the case can be started there if the country who has signed the Rome Statute has breached it, and Bahrain hasn't signed it. So, it is very difficult. There are situations where cases can be brought to the International Criminal Court of countries that have not signed the Rome Statute. That happened in Iraq. What it would take is the UN Security Council's vote, saying that their crimes against humanity are so serious that they fall under the jurisdiction of the International Criminal Court. In the case of Bahrain, these are serious human rights violations. I don't; however, think that they would be serious enough to constitute crimes against humanity, when we talk about things like genocide, it's serious but not as serious as that, so I don't think that there is a way that these cases can be brought to ICC.

Bahrain Mirror: What are your thoughts about the trials of both Sheikh Ali Salman and Nabeel Rajab?

Bach: I actually watched the trial of Nabeel Rajab and it's actually appalling. What is of great concern is the fact that preventing any of the public from coming into the trial, and even if they do-I was able to go to court to see Nabeel Rajab's trial for example-they still conducting half of the hearing behind closed doors in a secret room  in the back. So, they are really trying to stop one of the most important safeguards, which is public viewing. It's very important that the public can view cases, because it always causes the impression that the government has something to hide if they don't. The approach which regards the opposition is quite clear. They organized an approach to try and stop any kind of opposition. They are using the Criminal Court as a tool to fight any kind of lawful and peaceful opposition. It is highly condemned by the international community, but as I said the difficulty is going to be getting Bahrain to listen to the international community. There is no doubt whatsoever that the way which this trial of Sheikh Ali Salman is being conducted breaches just about every possible standard that there is a fair criminal trial certainly within Europe and for the wider part within most of the other western countries in the international community.

Bahrain Mirror: What are your views on the Bahraini government's accusations of violence against the opposition?

Bach: I'm not aware of any actual violence or criminal actions that have been taken. If there is an opposition party or an individual which takes for example an act of violence, then there are proper criminal channels to go over them. It is entirely proper that this person could be arrested, and they should be tried openly where the public can see them, where charges are lied there to always be a mechanism to deal with actual violence and actual threats to national security. What is not permissible is to make charges to prevent opposition.There is no other reason for the authorities to be conducting trials in secret, to be preventing access to the courts, to be preventing the public from watching.